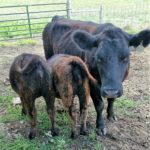 Highland cattle are the oldest registered breed of cattle with a Herd Book being published in 1885. The Scottish Highland Cattle Society was formed in 1884 and most of the cattle registered were black. Originally, there were two subgroups of Highland cattle, which today are merged into one. The smaller, mostly black or brindled cattle were raised on the western islands and were known as Kyloes, and the larger red animals of the Scottish mainland. Today, Highland cattle may be red, black yellow, white, brindle, silver or dun in color. All these colors are recognized by the registry, but only solid colored animals are allowed to be shown in the sanctioned shows.  [Click here for a pdf]

Archeological evidence of the Highland breed goes back to the 6th century with written records existing from the 12th century. The first recorded importation into the United States occurred in the late 1890’s when western cattlemen recognized the need to improve the hardiness of their cattle herds. Earlier importations are likely to have occurred since large numbers of Scotch/Irish immigrants came to this country early on, but the absence of a registry precludes any definitive proof. The American Highland Cattle Association registry was formed in 1948. The reasons these ranchers selected Highland Cattle are the same reasons you should also consider the breed. 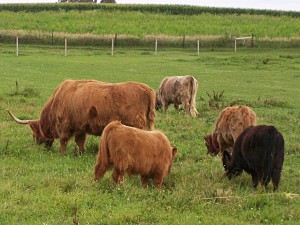 Highlands are slow maturing which make the meat fine textured and succulent. In a recent study at Manyberries Research Station, Canada, groups of Hereford, Highland and Highland Herefords crossed were tested. The Highland groups produced 2,000 pounds more beef than the purebred Herefords, while the Highland/Hereford crosses produced 6,000 pounds more than the pure Hereford groups.

Highland cows will average 900-1200 pounds when mature. Bulls will average from 1500-2000 pounds depending on forage conditions. A study by the Scottish Agricultural College determined that Highland beef is significantly lower in fat and cholesterol and higher in protein and iron than other beef breeds.

They are a true multi-purpose animal, producing meat, milk and fiber. Highlands can be used as oxen or for clearing land of unwanted brush. Many people just enjoy seeing and experiencing these beautiful animals in their pastures. Highland Cattle have a rich history and those working in the Highland breed today see an exciting future ahead. Highland Cattle are a dynamic part of our history and will play an important part in the future in the grass fed cattle industry.